Icons on the DOT travel map will show information reported through Waze.

The Iowa Department of Transportation is getting more roadway information in a new data-sharing partnership with the administrators of the smartphone app Waze.

DOT spokesperson Sinclair Stolle says the app can provide the information on traffic issues soon after they happen. 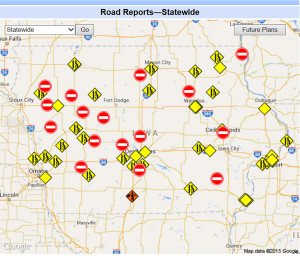 “A Waze mobile ap user reports something on the roadway via the mobile ap and that goes into a data feed. And that data feed is then ingested into our traveler information system — which includes websites, phone if you call 5-1-1, our mobile app and our interface that our traffic operations center uses,” according to Stolle.

Stolle says the Waze information gets confirmed as more motorists drive by to ensure inaccurate information isn’t being fed to drivers.

“It’s kind of like a social media for traffic reporting, is what Waze is, they call it crowdsourcing information,” Stolle says. “And with social media, we’ve found that the public kind of corrects itself. So, if somebody is really off base, a lot of times you are going to get somebody who is going to kind of correct and get things going the right way. And that’s kind of what Waze uses,” Stolle says.

Stolle says the information from Waze is reviewed before it is sent out by the DOT. “We aren’t reporting everything that is on the Waze ap, for example, police reports. Because you can report visible police traps and things like that. We are also filtering out things that might not impact traffic,” Stolle says. Waze information that might impact traffic like traffic jams, crashes,objects on the road or heavy fog will show up as icons in blue circles on the DOT traffic reports that a user can click to get more details.

The DOT says Iowa currently has approximately 5,000 active Wazers in the Des Moines area and tens of thousands of Wazers statewide. To find out more about the Waze Connected Citizens program, visit www.waze.com/ccp.