You are here: Home / Agriculture / Governor goes to Denison to discuss keeping Tyson workers in town 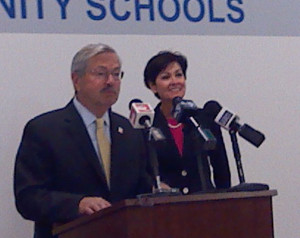 Governor Terry Branstad visited Denison this morning to talk with local officials about the closure of a major employer in Denison. Earlier this month, Tyson Foods announced it would close of its beef slaughter plant in Denison, eliminating 400 jobs.

“It’s a set back, but we also want to look at it as an opportunity to diversify the economy and to get more job opportunities for the people who are losing their jobs at Tyson,” Branstad said.

Branstad said he’s optimistic many of those who’re losing their job can land a new one in Denison.

“We have Quality Foods announce that they’re going to be adding about 200 jobs here in Denison,” Branstad said. “There’s a job fair and there’s about 80 different businesses that are looking at hiring people, so the community’s doing all it can and the state is partnering with them to make people aware of the job opportunities that are available here and the retraining and other opportunities to keep people here.”

Tyson is offering its Denison workforce jobs at Tyson plants in the Nebraska cities of Lexington, which is a four hour drive away from Denison, and Dakota City, which is about 90 minutes away.

“Many of these people don’t want to leave Denison,” Branstad said, “and we want to show the fact that there are good jobs available and there’s also state programs for retraining and those sorts of things that can help keep them in the area.”

For example, Branstad expects “significant growth” to continue in the ethanol industry and he points to the ethanol plant in Denison run by The Andersons Ethanol Group.

“Last year I proposed a bio industrial tax credit. It passed the House twice, but didn’t pass the Senate,” Branstad said. “We’re very hopeful that’ll pass next year. We’d be the first state in the country (to have it). I talked about that at the World Bio Conference in Montreal. There’s a lot of interest and excitement, companies from all over the world to looking at that as an incentive to locate here in the state of Iowa.”