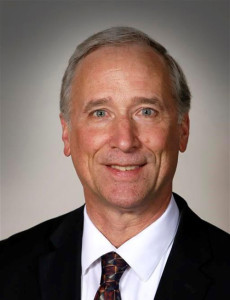 A Republican legislator from northwest Iowa will soon resign to take over as general manager of the Iowa Association of Electric Cooperatives, which provides power to about 650,000 Iowa customers.

Representative Chuck Soderberg of Le Mars has worked for the Northern Iowa Power Cooperative for the past 36 years. Soderberg grew up on a dairy farm near Burt, Iowa, and has lived in Le Mars for the past four decades. Soderberg will move to the Des Moines area and he’ll start his new job with the state association for Rural Electric Cooperatives on September 8.

“The organization provides a number of services to the RECs and the generation transmission cooperatives throughout the state from the regulatory support, legislative support, safety support and education and communications,” Soderberg says, “Also included are the association’s health insurance plans and the retirement programs that many of the RECs participate in.”

Soderberg, who is 58 years old, has served in the Iowa House since 2005 and, for the past two years, he has been chairman of the House committee that writes the state budget. He’ll resign from his House seat soon and a special election will be held to select his replacement.

“From a timing standpoint, we’re still working through that,” Soderberg says.