You are here: Home / Education / Project will work to get high schools involved in programs for veterans 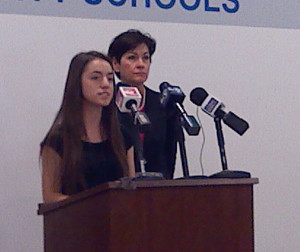 Araceli Lopez is the president of the Iowa Association of Student Councils. She says the program hopes to get schools in the state involved in “supporting those who serve us.”

“We want to make where it’s not just Veterans Day that we can do things, we can do things throughout the whole year to raise awareness and fundraise for them,” Lopez says.

Lopez spoke Monday in Sioux City at a news conference with Governor Terry Branstad and Lieutenant Governor, Kim Reynolds. Reynolds outlined some of the goals of the program.

“Twenty-thousand service hours, 15,000 donated to help veterans currently serving military men and women and their families throughout the state, and 40 schools in Iowa participating in this year’s state project,” Reynolds says. Lopez says the schools may choose whatever type of project they wish to use to help their local veterans.