You are here: Home / Agriculture / Rains could bump up crop yields in northwest Iowa 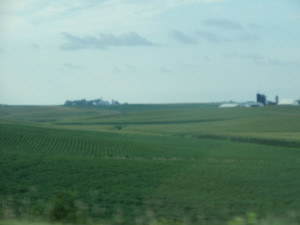 An Iowa State University Extension agronomist says last week’s heavy rains that fell on northwest Iowa brought a big boost to crops, while record yields may now be possible for the region this fall.

Joel De Jong says several of the far northwestern counties were desperate for a good drenching.

“You get north of the Le Mars area, we were pretty dry,” De Jong says. “Some of those heavy rains actually got absorbed pretty well, brought some of the streams up with very limited flooding. We probably increased some of our erosion just a bit, but considering how much rain we got, we actually handled it quite well.”

De Jong says the soybeans had been especially dry and the corn needed moisture as well. “A lot of our soybean fields are in what we call the R-5 stage,” he says. “We’ve got pods that are getting decent length and the beans in them are really putting on dry matter right now. It’s really going to help the soybean fields. Corn, we’ve got a lot of dry matter to add to those ears, too, so that rain, particularly in those areas that were showing moisture stress the week before, it was a huge benefit.”

De Jong says conditions are looking so favorable now, there could be records set for the corn harvest. “Northwest Iowa really looks pretty good, in general,” he says. “We’ve got some problem areas as we were waiting for that rain to show up. We have some areas that look like we have a lot of farms that are probably going to set record yields this year.”

The potential is there for a great soybean crop as well, although De Jong says there are some signs of white mold.