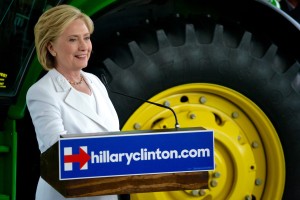 Democratic presidential candidate Hillary Clinton this afternoon unveiled a series of steps she says will help revitalize rural America. Standing in front of a John Deere tractor, Clinton spoke to a crowd of more than 250 at the Des Moines Area Community College campus in Ankeny.

“I wanted to emphasize the changing face of rural Iowa and rural America,” Clinton said. “Education, innovation, technology — Iowans are in the future business. That’s what all Americans should be in.”

AUDIO of remarks from US Ag Secretary Tom Vilsack and Clinton

Clinton’s is calling for boosting the Renewable Fuels Standard and a new national infrastructure bank that would make loans to expand broadband in rural America. She also promised to recalibrate key federal farm programs.

“As president, I’ll make sure that federal resources like disaster assistance and crop insurance go to farmers and ranches who need it the most, not those who have the biggest businesses or the best connections,” We will change the formula.” 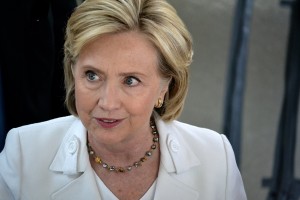 Clinton said quality child care, preschool and health care are too scarce in rural America and she praised Planned Parenthood as a key provider of reproductive health services in rural America.

“This shouldn’t have to be said, but how can anyone be advocating for denying women access to health care?” Clinton asked and the crowd applauded. “That may be good politics in a Republican primary, but it is terrible policy in the real world. It’s wrong and it should stop.”

During a news conference after the event, Clinton told reporters she is not speaking “behind the scenes” with Vice President Joe Biden as he considers running against her. 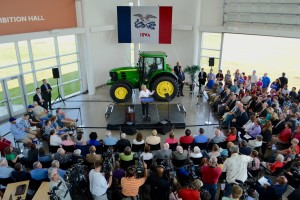 “I think he has to make what is a very difficult decision for himself and his family and he should have the space and the opportunity to decide what he wants to do,” Clinton said.

The last question of the news conference was about this morning’s murders of two TV journalists in Virginia.

“I want to reiterate how important it is we not let yet another terrible instance go by without trying to do something more to prevent this incredible killing that is stalking our country,” Clinton said.