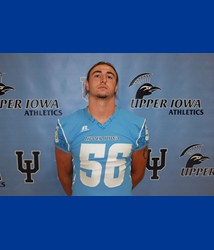 Upper Iowa is coming off back-to-back winning seasons for the first time in 50 years but if the Peacocks want to make it three in a row a host of newcomers will need to step up. Coach Tom Shea’s team lost 28 seniors and eight All-Conference players from last year’s team that finished 6-5.

The strength of the team going into the season will be up front on defense.

“I think we’ve got a lot of good depth there for the first time”, said Shea. We’ve had great players there that stood out but its been kind of an achilles heel because we have not had the depth when we needed it.”

The defensive line is backed up by an experienced corps of linebackers, including senior preseason All-American candidate Alex Wahl.

Eight starters are gone on offense, including four-year starter at quarterback Cole Jaeschke and all-time leading rusher Chris Smith. Shea says the Peacocks will need to be efficient and stay on schedule.