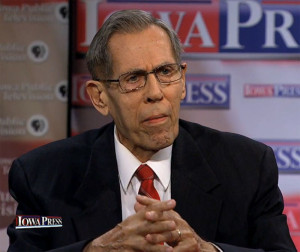 David Stanley during an appearance on Iowa Press on Iowa Public TV.

An influential Iowa Republican who founded a taxpayer rights group nearly four decades ago has died.

David Stanley of Muscatine was elected to the Iowa House of Representatives in 1958 and served 16 years in the state legislature. He ran two statewide campaigns for the U.S. Senate, losing to Harold Hughes in 1968 and John Culver in 1974.

In 1978 Stanley founded Iowans for Tax Relief, an organization that became an influential player in Republican Party politics. Stanley has served as chairman of the National Taxpayers Union as well.

Stanley, who was a lawyer, was 86 years old. His wife, Jean, died earlier this month, on August 4. Jean and David Stanley were high school sweethearts and their 67th wedding anniversary was in late June.

David Stanley’s father founded Stanley Consultants, one of the world’s largest engineering and construction companies, as well as HON Industries, the second-largest office furniture manufacturer in the world.

Iowans for Tax Relief released the following statement this afternoon:

David M. Stanley of Muscatine, Iowa passed away, August 26, 2015. Dave was involved in many organizations in Iowa and nationally.  Dave was Chairman of Iowans for Tax Relief, National Taxpayers Union, Public Interest Institute, New Hope Foundation, and previously served with his wife, Jeanie, as executive couple of United Marriage Encounter.

Dave served in the Iowa Legislature for 12 years and was House Ways and Means Chairman and Senate Majority Leader.

A Celebration of Life Service will be held on Saturday, September 26, 2015 at 11:00 AM at Wesley United Methodist Church, Muscatine, Iowa.  Dave’s wife Jeanie preceded him in death on August 4, 2015.  He is survived by his four children and ten grandchildren.

Memorial contributions may be made to New Hope Foundation or United Marriage Encounter both at PO Box 209, Muscatine, Iowa 52761.