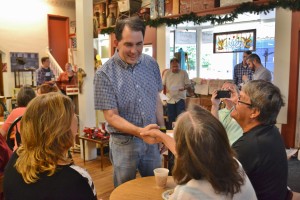 Scott Walker meets with supporters at the Corner Coffee Shop in Greenfield.

About 40 people gathered in a Greenfield coffee shop this morning to see and hear Republican presidential candidate Scott Walker and the first question from the crowd was about corn-based ethanol fuel.

A local businessman who supplies fertilizer to farmers asked Walker why he supports phasing out the Renewable Fuels Standard. Walker said he does not support a “permanent” ethanol mandate and it’s “logical” to end it.

“A good number of candidates have a position like mine. For example, people like Senator Ted Cruz wants it gone right away. I haven’t advocated for that,” Walker said. “…I don’t think you can just wipe it out all at once.”

Walker’s time frame? Get rid of the Renewable Fuels Standard in “a couple of years.” Walker said there should be some way to “ensure market access” for ethanol.

“My state’s gone ahead with some of the grants that help gas stations get blenders at the station because, really, in the end, if you truly have market access, then it should be up to the consumer,” Walker said. “Consumers can choose not only whether they want to have an ethanol blend or not, but at what levels out there. To me, as long as you have an adequate ability to do that, the market’s going to do well.”

Doug Holliday of Greenfield, a local farmer, was listening closely.

“He skirts it with a two-year phase out rather than saying, ‘I’m for the RFS. I’m for Iowa,'” Holliday said. “The ethanol plants as they have come in, look at what it’s done to the economy in Iowa.”

Holliday is evaluating where all the candidates stand on the ethanol issue, but it will not be the only criteria he uses to make his voting decision. 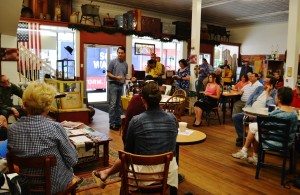 Scott Walker spoke to the crowd after he shook hands and chatted with the Greenfield group.