You are here: Home / Education / O’Malley, on polls: ‘I’ve got them right where I want them’ (AUDIO) 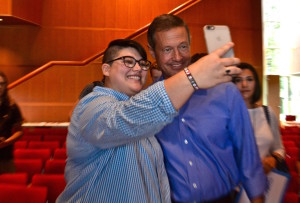 “This is the crush, right?” O’Malley said, shortly after stepping onto a soapbox so he could be seen more easily by the audience, some of whom were sitting on the floor. “You’ve just gotten back to school, have all sorts of stuff to do. You could be at other places, but you’ve chosen to come here, so thank you.”

O’Malley drew long bursts of applause from the Grinnell crowd with his call for a $15 minimum wage, his pledge to support campaign finance reform and his review of the gun control measures he approved when he was governor of Maryland.

“After the slaughter of the innocent in Newtown, Connecticut, we forged a new consensus and we passed comprehensive gun safety legislation banning assault weapons,” O’Malley said, adding he also supports backgrounds checks and had signed a law that forbids gun magazines that hold more than 10 rounds of ammunition.

At the end of his speech to the Grinnell crowd, O’Malley acknowledged he faces “long odds” in his White House quest. 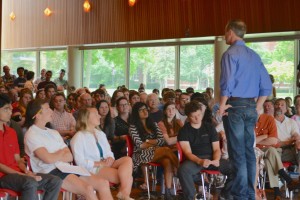 Martin O’Malley speaks to a crowd of students at Grinnell College.

“When I first got into this race, we were at one percent in Iowa, but then because of the discernment, the good judgement, the diligence of Iowans who take their voting responsibilities seriously…we moved to three percent,” O’Malley said. “And then after another 30 days, we moved to even percent in Iowa, so I’ve got them right where I want them.”

The crowd laughed, then applauded. A Bloomberg Politics/Des Moines Register “Iowa Poll” released this weekend showed Hillary Clinton is the “first choice” of 37 percent of Democrats who’re likely to attend the Caucuses, with Vermont Senator Bernie Sanders just seven points behind at 30 percent. Vice President Joe Biden was the first choice for another 14 percent of those polled. even though he’s not yet running, and O’Malley was the first choice of just three percent.

Otto Hall of Grinnell said O’Malley looked and sounded “presidential” — but Hall is waiting to see what Biden does.

“Sometimes he puts his foot in his mouth,” said Hall, who supported Biden in 1987 before Biden dropped out of that race. “But I think genuinely he’s a very bright guy and I’m just very interested to see if he’s going to jump in because that’s just going to be a seismic shake-up for the Democratic candidates.”

“Bernie Sanders is a long shot, but we said the same thing about Barack Obama,” Sherman said. “…Maybe we’re ready for the kind of political revolution that we need.”

Kelly Bennett of Newton has heard O’Malley four times before and today he signed up to caucus for O’Malley.

“I like his progressive agenda. I don’t that I heard anything today that I don’t agree with politically,” Bennett said. “And of course, with him, we don’t have to worry about him being indicted anytime soon.”

O’Malley did not mention Hillary Clinton by name during his remarks to the crowd, but later while talking with audience members individually O’Malley complained about how much attention’s being paid to Clinton’s use of a personal email server while she was secretary of state and the attention focused on the “horserace” rather than the ideas the candidates are talking about on the campaign trail.

O’Malley was at Iowa State University in Ames Saturday night and he visited the University of Iowa campus late this afternoon. He’s touting his promise to find ways to reduce student debt and O’Malley gets big applause from college town audiences when he says climate change offers great business and job creation opportunities. O’Malley has said the U.S. should have a 100 percent “clean” electric grid by 2050.

AUDIO of O’Malley’s appearance in Grinnell, 45:00