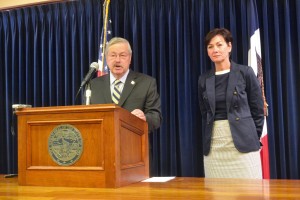 Governor Terry Branstad today called the “Kum & Go” convenience store chain a “great…family-owned”, Iowa-based business and he has no objection to the nearly $19 million in state tax incentives it will get for moving the company headquarters to downtown Des Moines.

“These decision are made by the Iowa Economic Development Authority Board and they have certain criteria in terms of job creation that they evaluate to determine who’s going to receive assistance,” Branstad said during his weekly news conference.

Kum & Go executives have promised to create at least 90 new jobs in the new $151 million headquarters. The company’s existing headquarters is in West Des Moines. The company’s first store opened in 1959, in Hampton. Kum & Go is now the country’s fifth-largest privately-owned convenience store chain, with 432 outlets in 11 states.