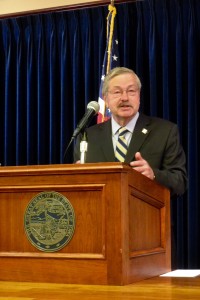 Governor Terry Branstad is defending the way officials in his administration chose four companies to manage the state-run Medicaid program. Four other companies that submitted bids but were not chosen have sued, calling the selection process haphazard and raising questions about the past performance of the winning bidders.

“Obviously when there’s this much money at stake and you’re not one of the four successful ones, you’re going to be disappointed…but I think the process is fair,” Branstad said during his weekly news conference. “I feel confident that the Department of Human Services is approaching this in the correct way.”

Branstad told reporters he hopes the lawsuit doesn’t delay the shift to a “managed care” system for Medicaid patients in Iowa. Critics are also raising concerns about the four companies that won the bids to manage Iowa’s Medicaid program. Branstad acknowledges the companies have had problems “in the past” but Branstad said those problems “have been corrected.”

“If you look at the four companies, they’re all four very substantial companies that have had significant experience and I guess I’d challenge you to find any Medicaid provider of any magnitude that hasn’t had some issues in the past,” Branstad said. “That’s just kind of the nature of it.”