You are here: Home / Sports / Cyclones hope to make it happen 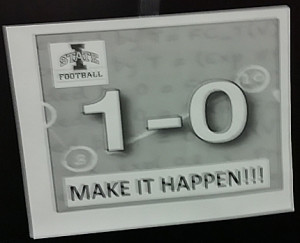 The doors in the Iowa State football complex all have signs hanging on them that read “1-0, make it happen!!!”. After opening the past two seasons with losses to FCS foes the Cyclones look to turn things around on Saturday night when they host the Northern Iowa Panthers in Jack Trice Stadium.

Iowa State coach Paul Rhoads says every team wants to get off to a fast start.

“It’s needed for confidence and it’s needed for all the hard work you put in from the end of last season to right now”, said Rhoads. We’re anxious to continue the preparation to get to that point Saturday night and go play.”

The Cyclones host a Panther squad that beat them 28-20 in the 2013 season opener.

Saturday’s game will be the first for new-look Jack Trice Stadium with the enclosed north end zone. Despite five straight losing seasons Rhoads says the Cyclones fans have shown their loyalty as the game is nearly sold out.