You are here: Home / Business / Iowa telecoms to use $53 million in federal money for broadband expansion 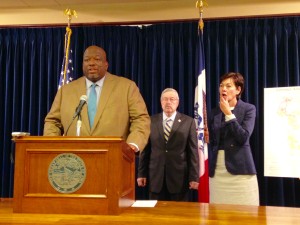 Governor Terry Branstad invited executives from four telecommunications companies to his weekly news conference this morning to tout recently announced federal grants that are destined to expand broadband access in rural areas. The $53 million will help 88,000 homes and business either connect to broadband for the first time or get access to higher download speeds.

“Access to broadband is critical to economic development, education, telemedicine and quality of life for all,” said Michael Sadler, a vice president with CenturyLink.

“This will enable us to serve high cost areas and deliver new services to many others,” Gray said.

Frontier Communications, which serves 36 communities in western Iowa, will use its federal grant money to provide service to 5400 customers.

“Those are in the rural areas, the highest cost service areas, those that do not yet have service,” Jack Phillips of Frontier said.

“The economics associated with being able to do this would not happen without this support from the FCC,” said Mike Schultz of Consolidated.

Consolidated will offer broadband service to about 3000 customers once the expansion is complete. These companies are putting up an undisclosed amount of their own capital for these projects and each company will qualify for new state property tax credits. Governor Terry Branstad said he wants Iowa to be the “most connected” state in the Midwest.

The governor acknowledged it will take billions of dollars to expand broadband statewide with enough speed to download at 25 megabits a second.