Hugh Tweedy points to the area where the pipeline would cross.

A dozen bands played on a farm in southeast Iowa this weekend as part of a protest rally against eminent domain. Hughie Tweedy organized the event, held Saturday on his 80-acre property near Montrose in Lee County — where the Dakota Access Pipeline company is trying to pass through in order to build an oil pipeline stretching from the Bakken Oil Fields in North Dakota to a facility in Patoka, Illinois.

“The Bakken Pipeline is trying to bully their way through this sacred family farm and I refuse to roll over and not fight this,” Hughie said. Eminent domain is the process through which the government can order either the seizure of land or demand easement rights for large projects. Private businesses are allowed to petition the government to grant eminent domain rights. 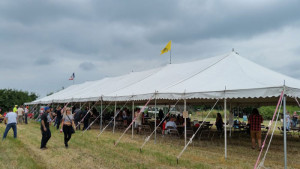 Tweedy has refused to take any kind of offer from the pipeline company. “To me it’s sacred, sacred earth,” Tweedy said. “I wouldn’t sell them a blade of grass for a million dollars…I will not back down, ever.”

Tweedy made headlines in May after accusing a pipeline representative of offering him the services of an 18 year old prostitute in return for the land rights. He claims to have a recording of the representative making this offer, which has been transferred to the state Department of Criminal Investigation.

Hundreds of people attended Saturday’s rally. The proposed pipeline would cut diagonally across Iowa from the northwest to the southeast. The Iowa Utilities Board (IUB) is expected to decide in December or January whether the project may proceed. Several landowners have filed a lawsuit against the IUB saying farmland cannot be taken for eminent domain unless it is for a public utility.