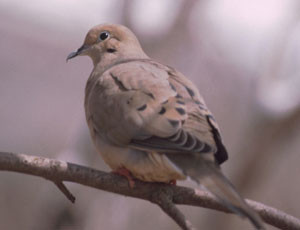 “Our hunter numbers have grown each year, I think our harvest has as well. Of course it was a brand new sport to Iowa, so we didn’t have any history of it. I think it’s tracking about like we thought,” Bogenschutz says. ” We had as many hunters and as much harvest as we’ve ever had in last year’s.”

Bogenschutz says scouting is the key to dove hunting as you need to walk prospective areas in the morning and at night to see how many doves are coming into the field and leaving the field. “You are looking for some type of small grain field or some type of recently disturbed ground. They really like that bare ground,” Bogenschutz explains. “It pretty common to see a lot of doves around ponds and livestock areas where the cattle have kind of tromped it down. You can see them around feedlots or in a just harvested grain field maybe that’s been worked.”

Bogenschutz says the DNR puts out plots in public areas for doves. “We’ll plant sunflowers or winter wheat and harvest it and knock it down and make it bare ground. The doves seem really keyed in on that bare ground and good visibility. You know they are not very big, so they like to see. That seems to be key when you are looking for good dove spots,” according to Bogenschutz. He says doves are fast and agile, and the national average is 5 to 7 shells used for each dove taken.

Bogenschutz says a lot of dove hunters also go after pheasants too as he says most of the upland game hunters buy a pheasant license and also buy a dove hunting license or squirrel license, so there’s a lot of crossover. The opening of the season coincides with the migration of the birds. Bogenschutz says the U.S. Fish and Wildlife Service keeps track of dove numbers and they should be plentiful this season. The entire state is open for dove hunting and the season runs through November 9th.