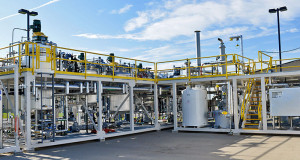 Researchers at Iowa State University’s Bio-Century Research Farm just west of Ames now have a $5.3 million tool to work with to try and improve roadways.

Researcher Eric Cochran says the pilot plant will make materials known as biopolymers. “These are rubbery polymers that we are making from soybean oil, is what we demonstrating here. And the role of the facility is to be able to produce the ton quantities of the material that we need to blend that into the asphalt that goes into the pavement for some demonstration sections,” Cochran says.

Cochran is an associate professor of chemical and biological engineering, and says the polymers help keep ruts from forming in the pavement. “What happens is in the hot summer months the pavement softens enough that that heavy semi traffic actually makes the roads flow like mud would, and it severely reduces the service life of the pavement,” Cochran explains. He says they believe they can stop the ruts and increase the life of the pavement.

“You add that polymer in and you get more elasticity at those hotter temperatures, which prevents those ruts from forming,” Cochran says. The plant was built and paid for by Seneca Petroleum of Crestwood, Illinois and its subsidiary Argo Gennesis. He says Argo Genesis is the sister company of Senneca Petroleum, which has funded the research that has taken them up to this stage and the building of the new plant.

Cochran says they hope to start production this week. “We hope to have those demonstration quantities of asphalt-modifer ready for the 2016 paving season. So then we would have some demonstration paving strips in place, and then after another year the performance data would be back,” Cochran says. “That’s really the last thing that we have to do to get acceptance by state agencies for accepting the use of that material on their roads.”

Cochran says biopolymers have a variety of uses in adhesives, coatings and packing materials, but they want to get this project rolling first. “The market barriers to entry for asphalt are relatively low compared to some of these other applications. That’s part of why we are starting with asphalt-modifier,” Cochran says. “Branching out to adhesives and sealants and paints and coatings, those are what we would do as a next step,” according to Cochran.

It took 18 months to design and build the facility that uses technology Cochran and fellow researchers developed. It’s expected the plant will make about 1,000 pounds of biopolymers each day.