You are here: Home / Fires/Accidents/Disasters / Nursing home resident in Hull dies after truck crashes through building 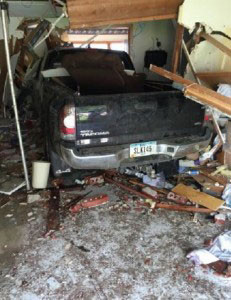 A resident was killed when this truck plowed into the Pleasant Acres Nursing Home in Hull.

A resident of a northwest Iowa nursing home was killed Monday when a pickup hit the building.

The Sioux County Sheriffs’ Office reports that about 2:10 p.m., 77-year-old Lawrence Sohl was driving a 2012 Toyota Tacoma westbound on Railroad Street when for an unknown reason, he struck a minivan traveling in front of him, and continued through an intersection and across a grass lawn before striking the Pleasant Acres Care Center building in Hull.

The pickup traveled through the rooms of two residents and stopped inside the building. The collision killed 88-year-old Anna Dykstra, a resident of the care center, who was in her room at the time. No one was in the second room.