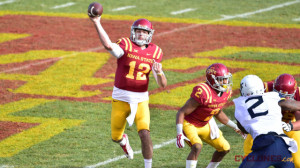 The first game can set a tone for the season and the Iowa State Cyclones hope the correct tone is set on Saturday night when they host Northern Iowa. Iowa State has dropped season openers to FCS foes the past two years and it was a sign of things to come as the Cyclones won only five of 19 games during that span.

Iowa State quarterback Sam Richardson says it is important to perform well in an opener and build confidence.

“It’s the start of everything”, says Richardson. It definitely builds confidence and sets the tone for the rest of the season.”

Sophomore receiver Allen Lazard says the Cyclones are motivated for a quick start after losing 34-14 to North Dakota State in last year’s opener.

“Losing that first game is a downer”, said Lazard. “It starts up some negativity you don’t need.”

Lazard says FCS teams always come into games with “a chip on their shoulder” and UNI will be no different. The Panthers beat the Cyclones 28-20 to open the 2013 season.