You are here: Home / Business / U-I presidential candidate challenged over his business background 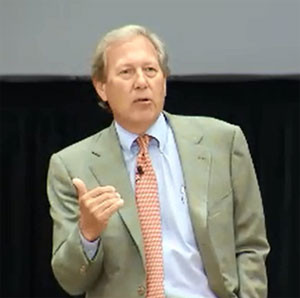 Bruce Harreld speaks during his public forum in Iowa City.

The fourth candidate for the University of Iowa president’s job took a lot of questions Tuesday about his background during a public forum on the Iowa City campus.

That’s because Bruce Harreld comes from a mainly business background, not academic. Harreld manages a business consulting company and his past experience includes teaching at the Harvard Business school, he was a senior vice president at IBM, and president of the Boston Market food chain.

Harreld addressed the issue of his background right away, saying he believes he has experience from the business world that would help improve the university. He was asked if his approach would treat the school too much like a business.

“There’s a tendency to believe that institutions like the University of Iowa have customers, and the customers are the students. And I think part of this arms race (for students) is in that spirit,” Harreld says. “There’s something very different about an institution like this — it clearly serves the state, we have a clear role in that. And that may be more important than any set of students.”

He says he can understand how people might think his approach would treat the school simply as a business, but says that’s not what he would do. “I would fight vociferously to differ with all due respect, to the notion that I’m just going to be another corporate guy and come in here and slash and burn. I actually think part of the answer here is…going from great to greater, because we can actually start talking about outcomes and be damn proud of what’s going on, tell the story,” Harreld says.

Harreld was asked about the new Board of Regents “performance-based” funding proposal which has the University of Iowa losing funding to the other two state schools. He says he could see a scenario where he could support it because of the limited amount of state funding available. “It could actually be that there are legitimate needs at the other institutions and there may be a period of time where they need more funding,” Harreld says. “It could actually come back the other way…there might be a time when some of that money might come back to us when we need it more. I would say to the other schools scoot over and support us as we supported you. So yes, I can imagine reasons for that.”

The issue swung back to Harreld’s qualifications again when a woman named Sarah Riley who says she is an attorney in Cedar Rapids and a second-generation Hawkeye stepped to the microphone. She says she was furious to see a finalist who had never had any leadership or administrative role at an institution, and says she didn’t change her mind after hearing his remarks. “Why did you even apply for this job?,” Riley asked. “Good, question and I’ve tried to answer that question. I think I can help, and if you don’t think I can help, I totally respect that,” Harreld answered. “But why do you think you can help if you have no background?,” Riley continued. “Because I’ve worked through transformation and taking an institution from whatever the numbers are to something higher,” Harreld responded.

Harreld was the last of four finalists to visit campus. You can see the full forum on-line at the University of Iowa Presidential search page. The Board of Regents plans to interview the four candidates on Thursday and then select one as the new president.