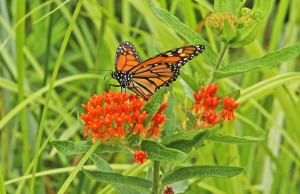 Besides buzzing bees, monarch butterflies are one of the most important pollinators for our agricultural state and a festival is planned later this month to celebrate the orange-and-black insects.

“Each fall, they set their sites on the mountains of Mexico and they travel through our state en masse on a journey that can be over 2,000 miles long,” Lowry says. “Sometimes, the butterflies will start all the way up in Canada, travel through the Midwest, down to the mountains of Mexico, and as they go through our state, we want to give them a proper sendoff.” The Monarch Festival being held at the zoo on September 20th will feature a monarch tagging event.

Lowry says people will be instructed by experts on how to safely capture the butterflies in nets. “And we very carefully attach this tiny, little sticker to a portion of their wings,” Lowry says. “It won’t affect their flying ability at all. It has a number on it and when they go down to Mexico, if that butterfly is found, then that number will help the scientists track the migration.”

That migration is very much revered by some people south of the border. “In Mexico, when the monarch butterflies arrive, they are believed to be the souls of their ancestors returning home,” she says. Monarch populations have dropped 80-percent in the past 20 years and there are increasing efforts to help restore their numbers.

“Really, it’s due to loss of habitat,” Lowry says. “Many people do not realize how important the Midwest is to the monarch butterfly. What the monarch needs more than anything is the milkweed. That is their host plant and the host plant means that’s the only plant on which they can lay their eggs.”

The festival will include traditional Mexican dancing and music as well as a Bug Parade. Everyone who attends the festival will get milkweed seeds so they can start their own butterfly gardens.