You are here: Home / Education / Preliminary figures show freshman enrollment up at UNI 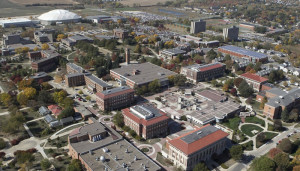 Aerial view of the UNI campus.

The University of Iowa, University of Northern Iowa and Iowa State University are all expected to release fall enrollment numbers next week, but UNI officials today issued some preliminary figures.

UNI spokesman Scott Ketelsen says the number of new freshmen on the Cedar Falls campus is up 6 percent over last year.

“This will be the third consecutive year that our direct from high school freshman class is larger than the one before,” Ketelsen said. “That’s very encouraging and positive. We’re trending in the right direction.” Last year, UNI’s overall fall enrollment dropped for the fourth straight year to just under 12,000 students. UNI recorded a high of just over 14,000 students on campus in 2001.

“I still think our target is something in the neighborhood between 13,500 and 14,000. We know we have the infrastructure to support that amount of a student body,” Ketelsen said. This is the first time in five years UNI will see an increase in transfer students. Figures indicate that group is up nearly 8 percent from last year.

“Our transfer students primarily come from Iowa community colleges, but we get some folks from other universities and colleges as well,” Ketelsen said. The number of new graduate students at UNI this fall is also up from last year.