You are here: Home / News / Sanders is ‘very gratified’ by ‘momentum’ behind his campaign 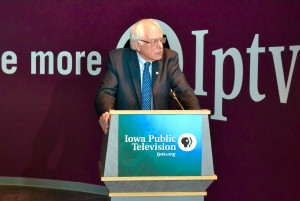 Democratic presidential candidate Bernie Sanders this morning said even he has been surprised by the “momentum” behind his campaign and his dramatic rise in the polls. A recent Bloomberg Politics/Des Moines Register “Iowa Poll” found Sanders is the first choice of 30 percent of likely Iowa Democratic Party Caucus goers, just seven percentage points behind Hillary Clinton.

“We are feeling very good about the campaign. We’re feeling good about what’s happening here in Iowa,” Sanders said during a news conference in Johnston, Iowa. “When I began this campaign all of four months ago I think it’s fair to say that 80-90 percent of the American people did not know who Bernie Sanders was or what he stood for, the ideas that he was advancing. I think we’ve come a really long way.”

“We also understand that people coming out to a meeting or to a rally is not necessarily converted into votes,” Sanders said. “So what we’re doing right here in Iowa, we have put together dozens of folks. On the ground, right now, our people are out, knocking on doors, talking one-one-one.”

Vice President Joe Biden is considering a run for the White House in 2016 himself, but Biden is reportedly telling supporters he’d seek just one term as president, because of his age. Biden is about a year younger than Sanders, who will turn 74 on Tuesday.  During taping of the IPTV program “Iowa Press” earlier this morning, Sanders said he is “blessed with good health” and he isn’t making that kind of a pledge.

“I cannot remember the last day that I missed work because I was sick, thank God, so I think I am healthy. If we win the first term and it goes well, we’ll take a look a tthe second term,” Sanders said. “It’s a little bit too early to speculate on that.”

Sanders will hold town hall meetings in Grinnell this afternoon and in Burlington this evening, with a stop in Ottumwa between those two events for a campaign office opening in south central Iowa. Sanders said during the “Iowa Press” taping that he finds that Iowa Caucuses “unique”.

“You demand a lot more of people than do people in the primary states. You demand people to know my views, know Hillary Clinton’s views, know Trump’s views and actually go to a meeting and argue about these things,” Sanders said. “And I love that stuff.”

Sanders appearance on Iowa Public Television’s “Iowa Press” program will air Friday at 7:30 p.m. and be rebroadcast Sunday at noon.