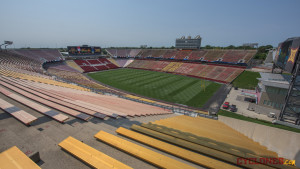 A record crowd will be in Jack Trice Stadium on Saturday night when the Iowa State Cyclones open the season by hosting Northern Iowa. It will be the first game with the newly remodeled south endzone that will increase the capacity to 61,500 fans.

Cyclone coach Paul Rhoads says it adds to the anticipation of opening night.

“We work 365 days for 12 recognizable days of work that are guaranteed and we fight like heck to get a 13th out of that”, said Rhoads. “The feeling is always one that is hard to describe. This year it will be even better.”

Iowa State will be out to snap a streak of two straight losses to FCS foes to open the season when they play a UNI team that beat them 28-20 in the 2013 season opener.