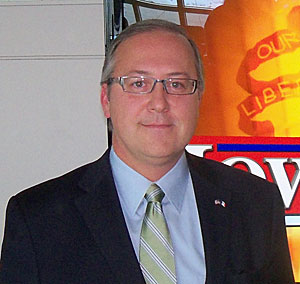 Republican David Young of Van Meter was part of a small group of congressmen who spoke directly with officials from the agency in charge of inspecting nuclear facilities in Iran. Young says the International Atomic Energy Agency has a side agreement that impacts the nuclear deal recently negotiated with Iran.

“Five of my colleagues, along with me, we went and visited the IAEA. It was a bipartisan group and we probed and bugged and tried to get this agreement and get answers from it and we never were able to see it. They didn’t give it to us,” Young says. “They said: ‘It would be unprecedented if we shared it with you.'”

Young, who is entering his ninth month as a member of the U.S. House, soon will vote “no” on the nuclear deal with Iran. Young says it is “disturbing” that congress will not know what’s in this side agreement.

Young says he has studied the 109-page “plan of action” that has been made public, outlining the terms of the deal the U.S. and five other countries have negotiated with Iran. His biggest concern is there’s a lag time of up to 24 days before inspectors can enter Iranian facilities suspected of enriching nuclear material for a bomb.

“In 24 days you can move a lot around and you can hide a lot of things,” Young says. “And you still hear the chants of ‘Death to America.’ They’re intent on wanting to destroy our ally Israel. They funded Hamas and Hezbollah. They’re still listed as a state sponsor of terrorism since 1994 from our state department.”

Young says the U.S. and its allies should “go back to the negotiating table” with Iran. Young, who represents Iowa’s third congressional district, made his comments during taping of IPTV’s “Iowa Press” program that will air on Friday, September 11 at 7:30 p.m.

Congress has until mid-September to review the Iran nuclear deal and take a vote on it. Republican leaders in the House have released a schedule indicating a vote on a resolutions expressing disapproval of the Iran deal will come sometime next week. President Obama has enough support from Democrats in congress to sustain his veto of the resolution from the House and the Senate and implement the deal with Iran.