You are here: Home / News / Dozens of paid campaign staff positioned around Iowa, canvasing for Caucuses 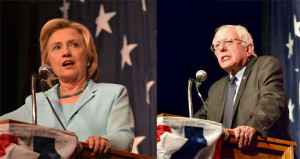 In the Democratic presidential race, the talk in the air may have been focused this past week on whether Vice President Joe Biden will run, but there’s an intense ground game underway in Iowa on behalf of some of the candidates already in the race.

On Thursday, Bernie Sanders told reporters he had “dozens” of supporters “knocking on doors,” trying to get commitments of support from Iowa Caucus-goers. Today, Hillary Clinton’s campaign is disclosing the scope of her own ground game: 30 more grassroots organizers have been hired this week. Clinton’s squad of paid community-level organizers in Iowa is now at 78.

“More than two-thirds of these hires that we’re announcing today are graduates of our ‘Hillary for Iowa’ fellows program where they have been really involved and learned Iowa organizing and Caucus organizing from top to bottom,” says Matt Paul, Clinton’s state director. “We think this is important to help develop talented, committed, top-notch organizers.”

Campaign officials say the group underwent a month-long interview process and the 30 new staff members will complete two more days of training before being dispatched to their final assignments.

“These organizers are professionals and they are a vital, vital voice for our campaign,” Paul says.

There are now less than five months to go before Iowa’s Caucuses and these 30 new organizers will live in different communities around the state for the duration of the Caucus campaign. Juliana Amin is among the first wave of Clinton organizers hired to work in Iowa. Amin was assigned to work in Wapello, Keokuk and Johnson Counties in April and she made this pitch at a gathering in Ottumwa in July: “Even someone who is as much of a force of nature as Hillary Clinton, she can’t do it by herself. We really need everybody here to join our team. We need you to fill out one of these ‘Commit to Caucus’ cards to sign up to literally stand in her corner on February 1 because she’s already standing in ours. We need you to sign up to volunteer, to talk to your friends and your family and your neighbors and you barber and your barista — whomever — and talk to them about getting involved in our campaign.”

Amin was speaking to about 60 people gathered in a private home in Ottumwa, just before Clinton herself spoke to the crowd. There was another paid local organizer in the house, along with two of those Clinton “fellows” training to be ground level organizers to speak with folks before they left.

A few decades ago candidate Martin O’Malley was one of those kind of organizers, assigned to the Davenport area, working on Gary Hart’s 1984 campaign. O’Malley told a crowd in Grinnell last weekend that he now has a crew of 30 staffers to do similar work around the state. It was O’Malley himself, though, who held up a “Commit to Caucus” card and singled out a staffer named Doug in the back of the room.

“If Doug doesn’t get at least 50 people to fill these out, he goes home and cries at night,” O’Malley joked, and the crowd laughed. “If you are prepared to caucus for me, please fill one of these out.”

Howard Dean’s 2004 Iowa campaign relied heavily on an army of supporters from out of state who arrived just before the Caucuses to canvas the state for Dean. In 2008, Barack Obama’s Iowa victory was built over the course of 10 months as paid organizers at the community level maintained extensive lists, with measurements of how committed a supporter might be, along with a system of “Barack Stars” that recognized volunteers who worked alongside the paid Obama campaign staff to do the detail work.

Now, heading into 2016, Clinton and O’Malley have employed the same strategy, with paid staff who’ve been on the ground for months in Iowa, becoming part of the local political scene and coming up with an accurate count of those who are solid supporters of a candidate, those who are leaning in a certain direction and those who will wait until the last minute to decide.