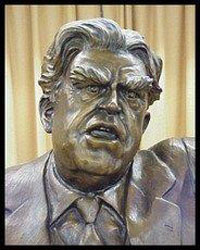 John Llewellyn Lewis is an Iowa native who was an influential figure in the U.S. labor movement. He started working at a coal mine in Lucas when he was a teenager. Lewis later wound up serving as president of the United Mine Workers of America for 40 years, from 1920 to 1960.

“Those who consume the coal and you and I who benefit from that service because we live in comfort, we owe protection to those men first and we owe the security for their families if they die,” Lewis testified during a congressional hearing in the 1940s. “I say it, I voice it, I proclaim it and I care not who in heaven or hell opposes it.”

Lewis was born in 1880, in a small coal mining camp about a mile east of Lucas, Iowa. His family later settled in Lucas and Lewis considered Lucas his hometown. His wife was the daughter of the local doctor. Becky Allen, the curator and director of the John L. Lewis Museum in Lucas, says Lewis’ father-in-law played a role in the first campaign Lewis ran, to become mayor of Lucas.

“He lost the election, which seems ironic after being president of the UMW for 40 years, but the story was said that Dr. Bell went around telling people not to vote for John L. Lewis for mayor because he was going on to bigger and better things nationwide,” Allen says.

Admission to the John L. Lewis Museum is free today. Special activities are planned in the town and there will be a parade at 11 o’clock. The museum has a 40-seat theater, along with artifacts that chart the life and influence of John L. Lewis. There’s a library and an area of the museum shows what the town of Lucas looked like in its hey-day when a dozen coal mines were operating in the area.

“The museum is just really full of photos and research material and documents and all kinds of memorabilia,” Allen says.

The first coal mine in Lucas opened in 1878. The last mine in the area closed in 1923 partly because the coal was deemed too soft and “dirty” for burning in homes. Oil was also becoming more widely available as a heating fuel.

John L. Lewis died in 1969 and he is buried in Springfield, Illinois, the city where he settled with his family as a young man. Lewis bought a home in Alexandria, Virginia, in 1937 and spent the rest of his life there.