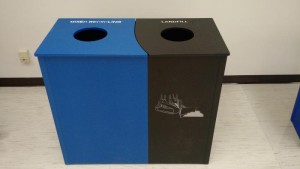 Dozens of new recycling containers are now part of the University of Northern Iowa’s landscape.

Recycling isn’t new on the Cedar Falls campus, but physical plant director Mike Zwanziger says this concept is: one side of the container is for mixed recyclables including plastic, paper and metal and the other side is for items headed to the landfill. “One side is blue which is an industry standard color for recycling, the other side is black for trash,” Zwanziger says.

In the past, using numerous bins provided limited success. The new receptacles are in all UNI buildings. “I’ve been talking to trash to everybody I can,” Zwanziger says. “I’ve walked through the buildings and I’m looking in all the trash cans and recycling containers and I’m loving what I’m seeing. The recycling or blue sides are filling up three times faster than the landfill side.”

The only expense involved for UNI was purchasing the two-sided containers. Removing and transporting the materials can be done by existing staff and equipment, according to Zwanziger.

The Princeton Review has named UNI to its 2016 Green Rating Honor Roll. Only 24 colleges and universities make the list.