You are here: Home / Sports / Cyclones look to extend dominance 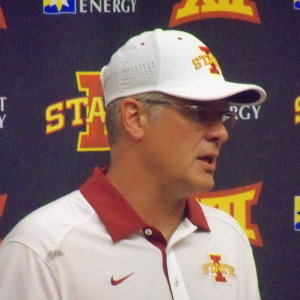 The Iowa State football program has struggled in recent years but the series against Iowa has been the exception. Last year’s 20-17 victory was the Cyclones second straight at Kinnick Stadium and they will look to make it four of the last five in the series when the teams collide Saturday afternoon in Jack Trice Stadium.

ISU coach Paul Rhoads says their is no secret formula to their recent success.

Three out of the last four we have put ourselves in a position to win and we’re gonna fight to have great preparation mentally and physically going into this one and see what will happen on Saturday.”

Rhoads says it is never difficult for the coaches to get the players ready for the Iowa game. Sophomore receiver Allen Lazard says the tone was set first thing Monday morning.

“We had a lift early this morning and one of our athletic trainers was wearing a Beat Iowa shirt”, said Lazard. We’re already breaking down by saying beat Iowa. We’ve already got our mind set and I think we have had it since Saturday night, actually.”

The Cyclones opened the season with a 31-7 win over Northern Iowa while the Hawkeyes opened with a 31-14 victory over Illinois State.