You are here: Home / Education / U-I helps to test the cars of the future today 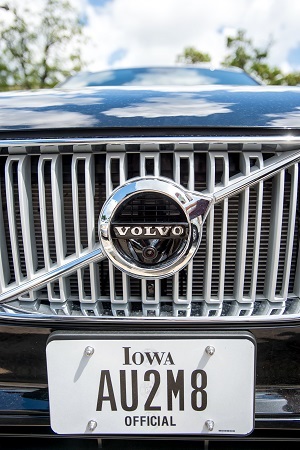 A camera which aids automotive safety technologies is shown on a Volvo XC90. Photo by Justin Torner

While we’re still a ways from the futuristic flying cars on “The Jetsons,” sophisticated vehicle technology being tested at the University of Iowa is getting us closer to cars that will drive themselves down the road.

“That’s a system that essentially adapts your speed to the car ahead, provides some level of braking when the car ahead brakes,” McGehee says. “That’s kind of the first generation of automation that starts to apply the brakes in your car and, even in some models, will brake to a full stop in regular stop-and-go traffic.”

While Apple and Google are developing self-driving cars, a certain luxury automaker is also working to perfect a similar product.

McGehee says, “Tesla, for instance, is announcing a more fully-automated vehicle where you still sit and you’re in control of the car but it will maintain the steering for you when you’re on the highway, brake for you in traffic and so forth.”

The California-made Tesla with self-steering features won’t be cheap, with rumors of some models reaching into six figures, and the plan is to offer a near-fully-autonomous car by 2021. Also, he says it’s very user-friendly, especially if you want to upgrade from a human-driven vehicle to having it be more computer-operated.

“What’s exciting about the Tesla is that those updates can be done over the internet or at a dealer to get those kinds of features plugged in,” McGehee says, “it’s not that there’s any new hardware that’s required.”

Despite advances by the tech companies, fully-automated vehicles may still be a decade off. In the short-term, McGehee foresees vehicles that don’t even have steering wheels that could operate in very limited areas with special roads, almost like golf cart paths on golf courses.