You are here: Home / Education / Upset over selection of new president, U-I Faculty Senate votes ‘no confidence’ in Board of Regents 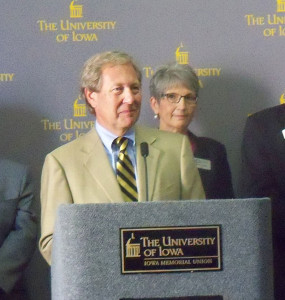 The University of Iowa’s Faculty Senate ended a two-hour debate Tuesday by approving a motion expressing “no confidence” in the board that governs the three state universities.

The action comes after the Board of Regents hired business executive Bruce Harreld as the U-I’s new president over three other candidates with academic backgrounds. Faculty Senate President, Christina Bohannan, told the faculty she’s heartbroken by the board’s action.

“The idea that our input was given apparently no weight in the decision of who should lead this institution is nothing short of shocking,” Bohannan says. Bohannan, who is a law professor, emphasizes the no confidence vote is directed to the Board of Regents and not Harreld. 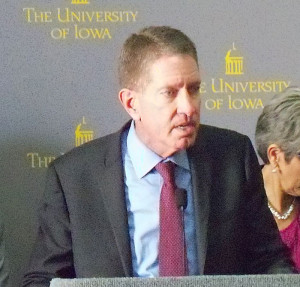 Bohannan was a member of the search committee selecting the four finalists, and says the Regents betrayed the U-I’s faculty by not valuing their comments about the four candidates before hiring Harreld. She’s not sure what effect the symbolic no confidence vote has. “But we understand a breach of trust between our governing body and this institution has occurred — and until we deal with that — it’s going to be very difficult to move ahead as an institution,” according to Bohannan.

Board of Regents President Bruce Rastetter released a statement in response to the vote.

“The landscape of higher education is changing and the current ways of operating are not sustainable. The Board of Regents brought four highly qualified candidates to campus during the search process and discussed their abilities to help lead the University of Iowa through the changes in higher education. Throughout this process, Board members heard from stakeholders all across Iowa about the type of qualities and leadership needed at the University of Iowa. After listening to all stakeholder feedback as well as having frank conversations with each of the candidates, the Board unanimously thought Bruce Harreld’s experience in transitioning other large enterprises through change, and his vision for reinvesting in the core mission of teaching and research, would ultimately provide the leadership needed. We are disappointed that some of those stakeholders have decided to embrace the status quo of the past over opportunities for the future and focus their efforts on resistance to change instead of working together to make the University of Iowa even greater.”

Dean Borg of Iowa Public Radio contributed to this story.