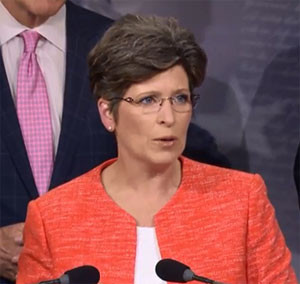 Republican Senator Joni Ernst is accusing President Obama of engaging in a “misinformation campaign” about the Iran nuclear deal by suggesting “there are only two options: his agreement or war” with Iran.

“Rather than misrepresenting the facts and our country’s options, I challenge supporters of this agreements to explain to the American people why they are supporting a flawed and bad deal today,” Ernst says, “when we should be putting our citizen’s interests and their security first.”

According to Ernst, this is one of the “most consequential” national security decisions the U.S. will ever make.

“How can we ever be certain of compliance if Iran decides to cheat and we have a weak inspection regime as part of this deal?” Ernst asks. “I would argue that we can’t.”

And Ernst says Iran is “poised to double-down on its support of terrorism” if the deal is ratified.

“As a veteran of Kuwait and Iran…I am beside myself, as are many other Americans who served in Iraq, regarding the president’s support for sanctions relief for one terrorist in particular,” Ernst says, “The leader of Iran’s elite, covert force — the Qods Force — General Qassem Soleimani.”

Ernst says that general is “directly responsible for the deaths of several hundred” U.S. soldiers during the Iraq War because he “supported and controlled” many Shiite forces in Iraq. Ernst delivered a 13 minute speech on the Senate floor last night to criticize the Iran deal.

“This nuclear agreement is one of those things that keeps me up at night as a mother, as a soldier and as a grandmother,” Ernst said.

Ernst, who served two decades in the Iowa National Guard, used part of her time to read letters from other Iraq veterans who oppose the deal with Iran, too.

There was confusion yesterday on the timing of a vote in the House and Senate on the deal itself. House members have devised a separate piece of legislation that would accuse President Obama of violating the law by not turning over all the details of the historic agreement to congress. While a majority of the House and Senate members are poised to vote against the deal itself, enough Democrats support it to guarantee that President Obama’s expected veto would be sustained and the deal would take effect.

Negotiators from the U.S., Britain, France, China, Russia and Germany met with the Iranians for months before announcing the deal’s framework this summer. President Obama says the agreement will prevent Iran from acquiring a nuclear weapon and “ensure that Iran’s nuclear program will be exclusively peaceful.”