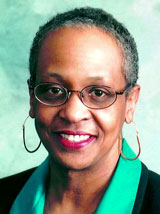 A woman who’s considered an international expert on the battle against obesity is headlining a conference in central Iowa today.

Shiriki Kumanyika is president of the American Public Health Association and is a professor emeritus of biostatistics and epidemiology at the University of Pennsylvania. Americans tend to think of obesity as a domestic problem, but Kumanyika says that’s not the case.

“It’s important to realize that this is a global issue,” Kumanyika says. “If you look at rates of obesity in emerging economies and different countries around the world, it’s a global problem and the solutions are connected because the food supply is global. Please, think about this as a global problem because it’s not just the U.S. by a long shot.” A study out this year finds Iowa has the 12th highest adult obesity rate in the nation — at 31 percent.

Other recent reports show progress is being made in combatting obesity in children in Iowa and nationwide, as well as in other demographic groups, but she’s not convinced everyone is getting the message.

“If you break that down by income level or if you break it down by race/ethnicity, there are some groups in the population that are still increasing their levels of obesity and others that are stabilizing,” Kumanyika says. “The struggle is far from over.” She says there appears to be a leveling off of obesity rates for people with higher incomes and for whites, but not for people in lower income brackets, African-Americans or Latinos. Changes are being made that are having an impact, however.

Many schools are putting more emphasis on physical education and some stores are changing their marketing strategies to make fruits and vegetables more appealing, yet progress is slow.

“We’ve changed a lot about the way we live. We’ve changed the food we eat. We’ve changed our neighborhoods, so we eat more and we are less active and we have become heavier,” Kumanyika says. “The interventions that are being undertaken, policies and programs, are really addressing that.”

She is in Iowa as part of a Global Public Health Symposium being held this week at Grinnell College.