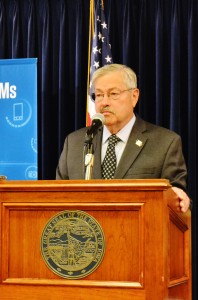 Governor Terry Branstad today said it’s time for change at the University of Iowa and he’s confident the businessman chosen as the university’s new president will be able to change the university for the better.

“I think change is essential,” Branstad said this morning. “And having been a university president at Des Moines University, I can tell you that change at a university is always difficult.”

Branstad, who has a law degree, served six years as president of Des Moines University. Branstad was the only president of the 117-year-old institution who did not have a medical background.

“Being a non-academic as I was and being chosen president of Des Moines University, I was immediately suspect from the faculty,” Branstad said. “I’m proud to say that I did win ’em over.”

The Faculty Senate at the University of Iowa this week issued a vote of no confidence in the Board of Regents after the board unanimously voted late last week to hire businessman J. Bruce Harreld as the university’s new president. The governor held a news conference via telephone early this morning from South Korea where he’s in the midst of a trade mission and Branstad defended the decision to hire Harreld.

“Somebody that I think has great leadership abilities and potential to make some significant changes that will benefit the University of Iowa and the State of Iowa,” Branstad said. “…I understand that academics have a kind of a distrust for somebody that’s not one of them, but I think we’ve got a dynamic leader here that can do some great things.”

“It was really good that he said he recognized he had a lot to learn and he could learn a lot from the faculty and wanted to work with them and listen to their ideas and I think that’s important and that’s the approach I took at Des Moines University,” Branstad said. “…I’m proud to say we were very successful. We grew the enrollment. We grew the endowment.”

AUDIO of Rod Boshart of The Cedar Rapids Gazette asking Branstad about Harreld, 3:15

The board that governs the University of Iowa held public forums with the four finalists for the top job on the Iowa City campus before hiring Harreld. Branstad spoke by phone with Harreld, though, before he it was announced he was a finalist. Branstad told reporters this morning he “was not involved in the process” of hiring Harreld, but spoke with him in August because Harreld had asked to speak with Branstad.

“I assured him as a University of Iowa alumni that I respect the separate governance of the Regents,” Branstad told reporters, “and I would be supportive of whoever the Regents chose.”

Harreld has been vice president of marketing and strategy for IBM. Harreld also served for two years as president of Boston Chicken, the company that operates the Boston Market chain. A fake “Bruce Herrald” twitter account and Facebook page have sprung up, with tweets about the “liberal eggheads” in Iowa City and a joke about Harreld’s new gig being “the country’s most ambitious job training program.”

(A previous version of this story incorrectly spelled Harreld’s name.)