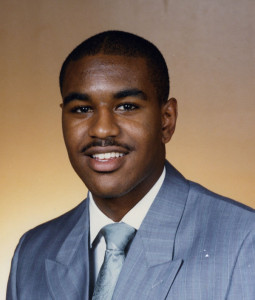 Former University of Iowa basketball men’s basketball player Roy Marble has died. Marble, the school’s all-time leading scorer, died today at the age of 48 at his home in Michigan from cancer.

Marble scored 2,116 points in 134 games to become the only Iowa player to score more than 2,000 points in his carreer. He also recorded 668 career rebounds and 281 assists as the Hawkeyes posted an 89-37 record during his career.

Iowa earned four straight NCAA Tournament appearances with Marble in the lineup — including an Elite Eight appearance in 1987 and a trip to the Sweet 16 in 1988. Marble shared team Most Valuable Player honors from 1987-89. He was one of 20 players named to Iowa’s All-Century team in 2002 and was one of five players named to the 1980’s All-Decade team.

Here is some of the reaction to Marble’s death:

“We are deeply saddened and mourn the loss of Roy Marble,” said McCaffery. “Roy has been a part of the Iowa basketball family for a long time, as one of the all-time best to play for the Hawkeyes, and since then as a tremendous supporter of our program. When I was fortunate to become Iowa’s head coach, one of the first people to reach out to me was Roy and we developed a close relationship ever since. “Roy had a huge impact on Iowa basketball and was one of the elite players to ever wear a Hawkeye uniform. Roy will be missed by all of us in the Iowa basketball family. Our thoughts and prayers are with the Marble family during this difficult time.”

“This is a very sad day for everyone who is a fan of the Iowa Hawkeyes and, particularly, a fan of Hawkeye basketball. We will all miss Roy immensely. Our thoughts are with his family and friends,” said Gary Barta, the U-I’s athletic director.

Roy Marble was terrific taking the ball to the basket and then he became a better outside shooter as his college career developed. He was very athletic and that fit with our pressure defense and fast break. The more you could get him out into the open court going to the basket, the better. He was a great teammate. He was for the team first, it wasn’t about Roy, it was about the team, and what was best for the team. He was unselfish as a player and he was coachable for that reason. He could fly in for dunks, but the fact that he developed not only his mid-range jumper, but also the 3-point shooting as he approached his senior year, is a tribute to the player he was. His children have the same unselfishness and intelligence as Roy and that’s a great tribute to Roy.

He was great teammate. He knew he couldn’t do it by himself and he learned from B.J. Armstrong and he gave more than he took. Coaches can win games, players win championships. When those guys are in a huddle and decided they’re going to get three stops in a row, there’re the ones who can make those plays. Roy had that intangible. He cared as much about the team success as his own, and that’s rare. Roy could have gone anywhere in the country and he chose to come to the University of Iowa and help build a legacy. Roy will be one of the all-time greatest to ever play at Iowa.

Roy was a special player. He had a knack, love, and pride for the game of basketball. He brought out the best in himself and his teammates. He was a happy-go-lucky guy, full of energy, and was a team player. Roy scored a lot of points, but if you were open, you better have had your hands ready because he was going to find you with one of those flashy passes. He took pride not only scoring the basketball, but enjoyed making that pass ahead for a teammate for a layup. Roy was unselfish with the basketball. When you think about Iowa basketball and all the legends who played for the Hawkeyes, for Roy to not only be the all-time leading scorer, but the leading scorer by over two hundred points, that says something about his ability and also the winning pedigree he brought to Iowa.

Roy’s athleticism took him to another level. He would overpower people at times with his size, quickness, and jumping ability. He did a little of everything. I couldn’t believe the stuff he could do. He helped me be a better player because of how good he was. Roy was the face of Iowa basketball back then and it was a special thing.