You are here: Home / Sports / Will Iowa lay another Cy-Hawk egg? 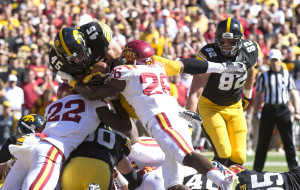 Some of the most head scratching moments during the Ferentz era, however, have occurred in the series against Iowa State. The latest example was a 20-17 loss in Kinnick Stadium a year ago to a Cyclone team that failed to win a Big-12 Conference game.

As the Hawkeyes get set for the 63rd meeting in the series senior tight end Henry Krieger-Coble says they are focused on the present and not the past.

“We have a completely different team and so do they”, said Krieger-Coble. There are new challenges that are going to face us and they are going to come out hard just as they always do. We need to match their intensity and we definitely want to improve on how we played last year because it was not good enough at all.”

The loss to Iowa State in 2014 along with a three game losing streak to close the season has elevated the criticism of an Iowa program that has not won more than eight games since back in 2009. Senior running back Jordan Canzeri says the Hawkeyes do a good job of tuning out the negativity.

“It’s always going to be there”, said Canzeri. “Before the season started we had all the noise about how our offensive line is going to look and they proved themselves. It’s stuff like that we don’t let into the facility”

Iowa leads the all time series 40-22 but the Cyclones will be out to claim a fourth victory over the Hawkeyes in their last five meetings.