You are here: Home / News / Trump says ‘aggressive’ tone is winning over voters. ‘We can’t be nice and low-key.’ (AUDIO) 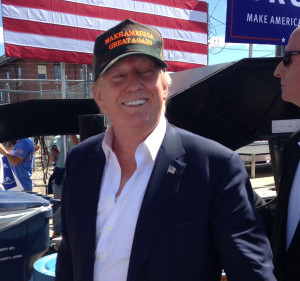 Republican candidate Donald Trump says American voters want a president with an “aggressive tone” and that’s why he’s leading in the polls.

“I think today we’re looking for real super competence. We’re tired with this nice stuff. We need people that are really, really smart and competent and can get things done,” Trump said in Boone, Iowa, to cheers. “We need people with an aggressive tone and we need people with tremendous energy.”

Trump paused slightly at this point, before adding: “And I’m your candidate, O.K.?” 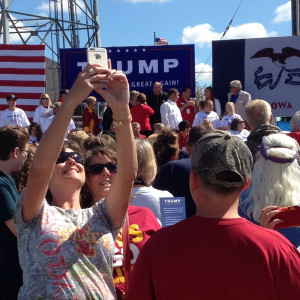 The crowd of about 600 cheered. Trump spoke early this afternoon, right next to the busy railroad tracks that run east to west through Boone.

“Oh, I love that sound, mm,” Trump said as the engineer braked and the sound reverberated through Boone’s downtown area. “But you know, when I’m president that train’s going to be going a hell of a lot faster. It’s going too slow. No, it’s true.”

As the crowd laughed and clapped, Trump joked the engineer had slowed the train because he wanted to listen to the speech.

The crowd cheered loudly when Trump repeated his promise to “build the wall” along the U.S. border with Mexico to “stop illegal immigration.”

“If you’re illegal, you’ve got to go back,” Trump said, as some in the crowd yelled, “Yeah.”

They cheered his promise to cut taxes for the middle class and raise taxes on wealthy “hedge fund managers”. There was only a smattering of applause, though, when Trump mentioned Rick Perry, the former Texas governor who dropped out of the race Thursday. 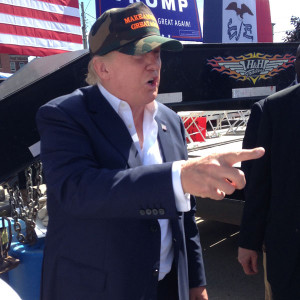 Donald Trump speaks to the media.

“He’s gone, good luck,” Trump said. “He was very nasty to me, but you know yesterday I put out a tweet. I said he’s a wonderful man and I wish him well. People couldn’t believe, but when you win, everybody’s wonderful. Right? I think he’s actually a nice guy.”

Trump used the “nice guy” label to describe Ben Carson, the retired neurosurgeon who is polling in second place in Iowa, but Trump dismissed Carson as too “low energy” to be president.

“Ben is a nice man,” Trump said, “but when you’re negotiating against China and you’re negotiating against these Japanese guys that are going to come at you in waves and they think we’re all a bunch of jerks because our leaders are so stupid and so incompetent and so inept, we need people that are really smart, that have tremendous deal-making skills and that have great, great energy.”

Trump makes no apologies for the way he’s campaigning.

“You know, we need that tone today. We need energy,” Trump said, to applause. “We need strength and we can’t be low-key and nice and beautiful.”

Otis Smith, who lives just a few blocks away from where Trump spoke, has narrowed his Iowa Caucus choices down to Trump and Carson.

“He has a point there,” Smith said of Trump’s assessment of Carson. “I like his idea of being more bold.”

Sheila Anderson of Boone, a registered no-party voter, is “curious” about Trump, but hasn’t decided yet whether she’ll attend the Republican Caucuses on February 1.

“I like that he says what’s on his mind and he doesn’t try to sugar-coat everything,” Anderson said. “He doesn’t care if he makes people mad, which I think is important.”

“We need a change,” Hammer said. “We need to get our country back before it’s too late.”

Trump left Boone, headed to Ames for tailgating before the Iowa/Iowa State football game. Trump told the Boone crowd he was going to the game itself, although he was careful not to choose sides.

“If you don’t mind, I’m not going to pick one,” Trump said in Boone. “…Everybody fully understands that.”