You are here: Home / News / Cedar Rapids residents gather to ‘Stop the Violence’ 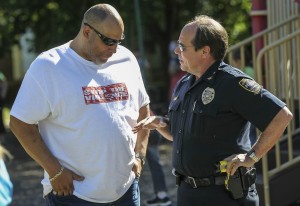 Residents of a Cedar Rapids neighborhood gathered Sunday in a park, not far from where police say a teenager shot and killed another teen one week earlier.

Police accuse 14-year-old Robert Humbles in the shooting death of 15-year-old Aaron Richardson on September 6. Over the following two days, police responded to more reports of shots fired they say were related to Richardson’s death.

At yesterday’s gathering in Redmond Park, people wore t-shirts with the words “Stop the Violence” printed on them. “I feel like Cedar Rapids is under attack. I feel like it’s getting worse. But why not shine over the darkness with light and that’s why we are here,” Krieger said.

Krieger expects similar community gatherings will be held in the weeks ahead in hopes of curbing violent crimes in the area.