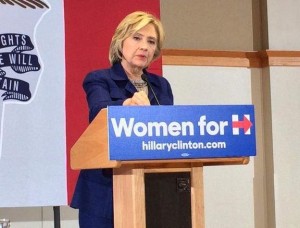 Democratic presidential candidate Hillary Clinton says she’s not worried about her poll numbers slipping in Iowa and nationally. She spoke with reporters today after a speech on the University of Northern Iowa campus in Cedar Falls.

“I’m not one of those who ever thought this was going to be a straight shot,” Clinton said. “I’ve been in and around enough campaigns to know that there’s an ebb and flow, polls go up and down, and people’s attention and decision making changes over time.” A Quinnipiac University Poll released last week shows Bernie Sanders with the support of 41-percent of likely Iowa Democratic caucus-goers. Clinton’s support dipped to 40-percent.

Clinton also addressed poll numbers showing many voters distrust her. “I’m absolutely confident that by the end of this campaign, people are going to know who’s fighting for them and who they can trust to fight for them and for their families, who can fight for the kind of economy that will work for everybody — not just those at the top, who has practical ideas that can be implemented, who has the experience, vision, tenacity and the skill to get things done,” Clinton said.

In her speech at UNI, Clinton focused on her plans — if elected president — for combating sexual violence on college campuses. “What I’m calling for is, number one, a comprehensive response to sexual assault so there is a system at every college and university, so if someone who has something to report knows where to go, knows who to talk to and gets the services required,” Clinton said.

Clinton took a shot at GOP front runner Donald Trump, who’s been criticized for recent comments about women. In August, Trump defended his remarks by saying, “I cherish women. I want to help women.” Clinton said she”d rather Trump stop cherishing women and instead respect them.