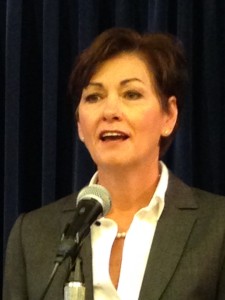 “It helps drive that phony narrative of…the ‘War on Women’ and that’s just not what’s happening here in Iowa,” Reynolds told reporters this morning. “Women are leading. We have Senator Ernst, who was the first woman elected to congress. We have a woman speaker of the House. We have a woman president of the Senate. We have a woman state auditor. You know, 14 (state) agencies are led by very dynamic, hard-working, articulate women.”

In August, Trump came under fire for the way he blasted a female Fox News anchor who had asked Trump questions about his past comments about women. Last week, in a Rolling Stone story, Trump was quoted as saying American voters wouldn’t choose rival Carly Fiorina as president because of “that face.” Reynolds says those kind of remarks are “not acceptable.”

According to Reynolds, voters want the presidential candidates to offer “ideas and solutions” rather than the kind of rhetoric Trump has used about women.

Reynolds is the fifth consecutive woman to be elected to the job of lieutenant governor of the State of Iowa. Reynolds made her comments this morning during a news conference in the governor’s office at the statehouse. Governor Branstad was not present for the weekly event. He’s attending the annual Midwest U.S. Japan conference in Tokyo.