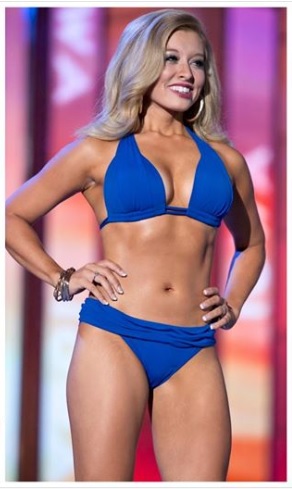 Miss Iowa marketing director Rachael Vopatek says no one is disappointed and Wiebers very satisfied with her showing in the nationally-televised pageant in Atlantic City, New Jersey.

“She’s doing really, really well, and she was in great spirits,” Vopatek says. “There was a big after-party last night that went to all hours and Taylor was all smiles, dancing.”

Wiebers is a 21-year-old Clinton native who is attending the University of Iowa. During the preliminary rounds, Wiebers won the talent portion for singing the song “Don’t Forget Me,” and she also placed first in the swimsuit category, in the early competition. Vopatek says only the top contestants got to show off their talents during the finals.

“Of course, she wished she could have performed on TV and we wish she could have, too, but there’s no part of me that feels disappointment in anything about Taylor,” Vopatek says. “She gave it everything and she wasn’t rewarded the way we wished but we’re just so proud of her.”

Vopatek says she’s sure Wiebers had the time of her life during her two weeks in Atlantic City.

“She made amazing new friends with several of the girls,” Vopatek says. “She was just very loved by the girls. Everybody was so happy for her with her preliminary wins. Definitely, the friendships and the memories and I think she should just be really, really proud of what she did.”

Vopatek says Miss Iowa already has a number of appearances scheduled and Wiebers will be very busy for the rest of her reign.