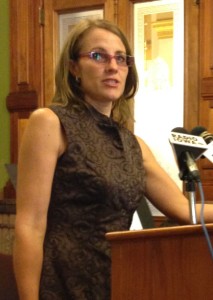 Members of “Iowans 4 Medical Cannabis” plan to personally present presidential candidates with a survey, asking for their views on the use of marijuana for treatment of a variety of medical conditions.

Maria La France of Des Moines has a 14-year-old who suffers from chronic epilepsy. According to La France, there’s been too much focus on the trivial during this campaign.

“How good looking Carly Fiorina is, I mean, come on. Give us a break,” La France said today. “This is more important.”

La France was the chief spokesperson for the group during a statehouse news conference late this morning.

“We know many Iowans who are quietly treating their diseases with cannabis and having great results, yet if these Iowans were to go public they risk jail, they risk criminalization, they risk losing their assets,” La France said, “so, we stand here for the people who can’t.”

Sally Gaer of West Des Moines has personally talked with a handful of the candidates already to tell her personal story and ask them to support the use of marijuana and its derivatives for medical purposes.

“They need to see the suffering of Americans and be willing to help,” Gaer said.

Gaer and her husband are caring for an adult daughter who has chronic epilepsy. Gaer talked with Donald Trump on Saturday and asked him to “please start discussing medical cannabis.”

“Hopefully voter pressure and more public outcry will make them start to answer these questions and give thoughtful dialogue,” Gaer said, “and not fall on the, ‘Oh we need more research’, ‘Oh, it’s Schedule 1,’ ‘Oh, the War on Drugs,’ ‘Blah blah blah.'”

“As soon as someone realizes that someone they love or care about could be helped by this plant, this will become available to everyone in a controlled way,” La France said.

Iowans 4 Medical Cannabis is sending its questionnaire to each candidate, but members of the group also plan to attend candidate events around the state, present the survey personally to the candidates and video tape the discussion.