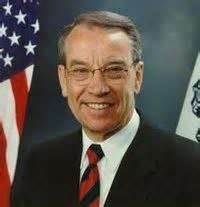 While President Obama was in Iowa on Monday talking about how to make college more affordable, Iowa Senator Chuck Grassley is introducing a bill this week designed to reduce student loans — and debts.

Grassley, a Republican, says borrowing too much money on a student loan can turn academic dreams into financial nightmares. He says he based part of the legislation on a successful program at his alma mater.

“The University of Northern Iowa has started out counseling students about how much to borrow and not to get too far into debt,” Grassley says. “The average debt of UNI students has gone down $842 over the last year.”

UNI’s “Live Like a Student” program includes workshops and courses designed to educate students on the importance of living within their means while they’re in school so they don’t need to live like a student later in life.

A few years ago, Grassley met with then-University of Iowa President Sally Mason to discuss the massive amount of debt students can quickly rack up when they borrow more money than they need for tuition, books and room and board.

“The average student graduates from the University of Iowa with about 29-, 30- or maybe now it’s $31,000 of debt,” Grassley says. “She said if they borrowed what it took to actually get the degree based upon the costs that I just mentioned, that it would be about $13,000 less.”

More than 200,000 Iowans have student loans, or about 72% of Iowa’s college graduates, the fourth highest percentage in the country.

Grassley says his bill, called the Know Before You Owe Federal Student Loan Act, would make counseling an annual requirement before new loans are handed out, rather than just for first-time borrowers.

“It increases the amount of information students receive about federal student loans,” Grassley says. “This includes their potential ability to repay but rather than after signing on to tens of thousands of dollars in debt to Uncle Sam. In other words, if you can’t repay your loan, maybe you better think about whether you ought to take it out in the first place.”

The bill adds several key components to the information colleges would be required to share with students as part of loan counseling, including: