You are here: Home / News / Iowa bishop prepares to meet pope in Philadelphia 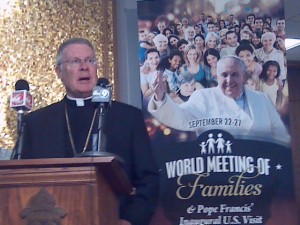 The four Catholic bishops in Iowa are preparing to travel east to see the pope next week. Pope Francis will make his first trip to America since becoming the leader of the Catholic Church.

Bishop R. Walker Nickless of the Sioux City Catholic Diocese will have an audience with the pope during the World Meeting of Families in Philadelphia.

“This is a great meeting where people from all over the world come and talk about the importance of family and marriage,” Nickless said. “Pope Francis really wants the church to be seen as supportive of family life and this is one way where he can do that.”

Nickless has never met Pope Francis before. Pope Francis has drawn criticism from conservatives who’ve objected to his comments about climate change and his warnings about “unfettered” capitalism. Bishop Walker said the basic doctrines and teachings of the church are not going to change.

“We’ve been around for 2000 years and we’ve survived because we’re clear to what Christ wants us to teach and we do that through the church,” Nickless said. “However, Pope Francis is a breath of fresh air. He’s saying the same things, but in a different way.”

The pope has said Catholics should be compassionate toward gays and lesbians, but Bishop Nickless said the church still considers sexual activity between two people of the same gender a sin.

“But he’s made forgiveness for that sin much easier and more accessible,” Nickless said.

Pope Francis is scheduled to arrive in the U.S. on Tuesday afternoon. Next Wednesday, the pope will meet in Washington, D.C. with U.S. Catholic bishops. On Thursday of next week Pope Francis will deliver a speech to a joint session of the U.S. House and Senate. He’ll visit New York the following day and conduct an evening mass in Madison Square Garden. The pope will spend that weekend in Philadelphia for events surrounding the World Meeting of Families.