The Iowa Supreme Court heard oral arguments today in a case involving lawyer fees awarded to Governor Terry Branstad’s brother Monte in a decision by the Iowa Court of Appeals.

The Appeals Court ruled Monte Branstad is due court fees after successfully getting the restitution from a fish kill dropped from nearly $62,000 to $5,300. The ruling said Branstad pointed out the DNR error in figuring the fish kill damages and his fees should be paid despite exceptions for state agencies in the law. 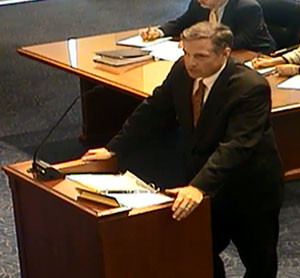 Attorney Jeffrey Thompson argued the Appeals Court was wrong. “The decision maker is the NRC (Natural Resources Commission), not the DNR. And so all these arguments about the DNR miss the point here, they are not even before you, that’s not the final agency that is here,” Thompson says.

Thompson says the process was set up to allow the state to give someone a fair hearing. “This point of having this opportunity to object without going to court to an agency’s action and invoke the right to a contested case was the goal of the Administrative Procedures Act, to give people protection, and it does that,” Thompson says. “And to then say that that now is subject to attorneys fees, I think walks it backwards.”

Thompson says Branstad was given a fair hearing and admitted to the spill and killing fish. “It wasn’t that they had to follow a certain methodology and then just didn’t have any facts to back it up. They had facts to support their position, it was just the legal conclusion was: you didn’t apply the right standard,” Thompson says. 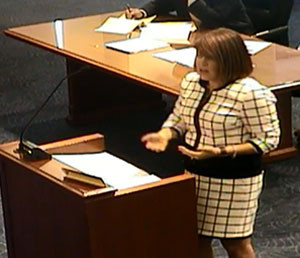 Justice David Wiggins expressed concern about giving an exemption in this case and asked attorney Christine Branstad about it.

“One of the problems with adopting your position –and my troublesome position — is that you’re going to penalize the agency when they act as an adjudicator and come up with the wrong decision. I don’t think I’d like to be a judge and when I am wrong, I’ve got to pay,” Wiggins says.

Branstad replied to Wiggins. “Well, that was essentially the argument made by the state at the Court of Appeals, was under this interpretation, DNR officers will have to think twice before issuing fines,” Branstad says. She says she doesn’t see anything wrong with making the officers think twice about the fines they issue.

Branstad argued this is the very type of case where there should be an exception to the rules, because Monte Branstad had to appeal to get the amount of restitution dropped. “Someone is going to have to pay the attorney’s fees to litigate. And if an agency has not followed their own rules, not followed their own practices and created an unfair situation — it seems like it makes more sense for that agency to pay for the attorney’s fees,” Branstad says.

The fish kill happened after a silage discharge from a basin on Monte Branstad’s property near Forest City entered the Winnebago River.