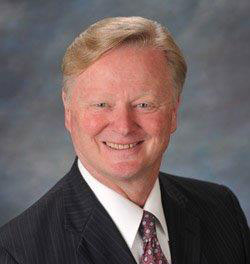 The group has just released an economic “profile” indicating 1.3 million Americans have a job directly related to manufacturing and agriculture along the river. Twenty million Americans get their drinking water from the Mississippi. Dubuque’s mayor told reporters that’s why his city is spending up to $15 million on a water quality initiative to try to reduce ag run-off into the river.

“We’re the first in Iowa to be working on that and it’s going to be quite comprehensive,” Buol said.

John Dickert, the mayor of Racine, Wisconsin, warned nitrate pollution is going to wreak havoc along the corridor.

“The mayors of the Mississippi are just starting to see these issues facing the Mississippi,” Dickert said. “Because the Mississippi moves at a faster rate, you don’t see this holding pattern that you see in the Great Lakes, but I will tell you it is coming.”

Dickert is among a delegation of mayors from cities that sit along the shores of the Great Lakes who are attending this week’s meeting in Dubuque.

“The great reason that these mayors are getting together…is to look at nutrient loading and what it’s done for Toledo…where you had the nutrient loading from the ag industry alone…creating a situation where 500,000 people had to have their water turned off because of the algae blooms and the microcystins that were involved,” Dickert said.

Last summer residents in the Toledo, Ohio, area could not drink their tap water — even if it was boiled — because officials said farm chemical run-off into Lake Erie had created toxic conditions. Dickert said thankfully a do-not-drink-the-water warning was issued before anyone died.

“The cost of nutrient loading and the cost of the pollution in the algae blooms which you’re starting to see on some shorelines and banks of the Mississippi…is exponential because it’s not just the clean-up…but it’s also what it does to the shoreline,” Dickert said, “the reduction in property values, the health conditions.”

Dickert told reporters the mayors want to work with farmers to try to resolve the problem.

“Let’s not fight each another on this issue because we need your food as much as you need our water,” Dickert said. “So instead of constantly butting heads, there’s much more opportunity for success and collaboration and that’s what we’re all going to work together to do because if we don’t, we can’t afford to have another Toledo ever.”

The mayors will be meeting in Dubuque with representatives of the Iowa Agricultural Water Alliance, a group formed by the Iowa Corn Growers, the Iowa Soybean Association and the Iowa Pork Producers.

The mayors of Bettendorf, Clinton, East Moline, Guttenberg and Riverdale are attending the meeting in Dubuque, along with mayors from nine other states that are adjacent to the Mississippi River.