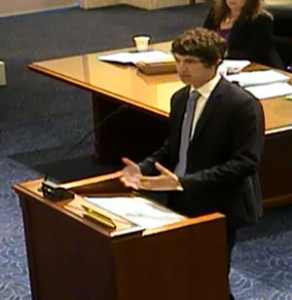 The Iowa Supreme Court heard arguments in a case today that could impact the way the state’s drunken boating law is enforced. The case involved Dale Pettijohn who was stopped while driving his pontoon boat on Saylorville Lake in central Iowa after a DNR officer noticed a woman dangling her legs over the back of the boat.

Pettijohn agreed to an alcohol test after the stop and was found guilty of drunken boating. Pettijohn’s lawyer Grant Gangestad argued the officer could have pulled up and asked the woman to move and did not have reason to stop the boat.

“He stated he was not swerving around, he was not changing speeds erratically, he was operating down the channels appropriately. He says the only reason he stopped the boat was because of the female passenger sitting on the back of the boat,” Gangestad says. “Now if we were to say that Mr. Pettijohn is responsible and solely responsible for any action that happens on that boat — we would be criminalizing him for the conduct of another person,” Pettijohn says.

Iowa’s Implied Consent law requires drivers of motor vehicles to submit to an alcohol test as part of their ability to get a driver’s license. A license is not required to operate a boat, and Gangestad questions whether the law violates the constitution in drunk while boating cases. “I think what we are dealing with here is whether or not his consent as a whole was voluntary. We are actually advocating under the Iowa Constitution that there be a know and intelligent portion added to that voluntariness,” Gangestad says.

He says the officer read the wrong range of possible penalties to Pettijohn if he refused the alcohol test. “I don’t think that he could make a voluntary decision based upon what he was told,” Gangestad explains. “I think that just inherently the Implied Consent procedure as it applies to boating is inherently coercive. It’s classic inducement.” 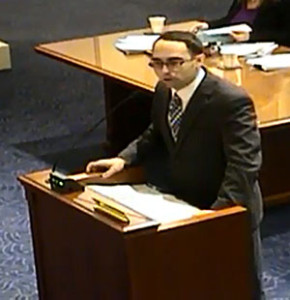 The attorney for the state, Louis Sloven, says the stop of the boat was proper as the DNR officer felt having the woman on the back of the boat near the propeller was careless and negligent operation. “Access to Iowa’s navigable waters may be a public right, but operating a motorboat on those public waters is a privilege — thus justifying the use of Implied Consent procedures to keep those waters safe,”Sloven says. “And third, the Implied Consent advisory read in this case tracked the statute perfectly. Reading a correct range of penalties did not render the defendant’s consent involuntary.”

Sloven says reading the potential penalties did not coerce Pettijohn into agreeing to an alcohol test. “This is a case where the advisory that was read, that was set out in the statute, is correct about the range of penalties that the defendant would face. It is a range from 500 to $2,000 and it is a revocation of at least a year,” Sloven says. Sloven also addressed the issue of whether stopping Pettijohn was justified in the first place.

“I think that when we’re talking about evaluating our peace officer’s actions, in retrospect, I think that there has to be some room for acknowledging that they are acting in the heat of the moment, there has to be a snap decision. There really is the possibility of grievous injury if they fail to act or fail to act effectively enough,” Slovan says. The justices heard the oral arguments in the case and will issue a ruling at a later date.