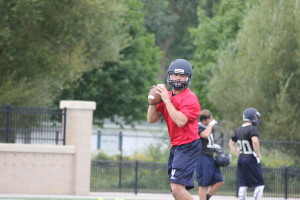 With just two starters back on offense and eight All-Conference players gone from last season this had all the makings of a rebuilding year for coach Tom Shea and the Upper Iowa football program.

Led by junior college transfer Dimitri Morales at quarterback along with a veteran and stingy defense the Peacocks are 2-0 heading into Saturday night’s game at home against Minnesota-Crookston. Morales has passed for 795 yards and five touchdowns in the first two games.

“He’s a good leader and the kids have elected him as one of the captains” said Shea. “The other thing he brings to the table is he has the ability to run the ball and has very good speed. He brings a different dimension than we are used to and can buy time with his feet.”

The defense has been as good as expected. The Peacocks are giving up only 92 yards on the ground per game and have yielded one touchdown in two games.

Minnesota-Crookston enters Saturday’s game with a record of 0-2 after losses to Wayne State and Sioux Falls.