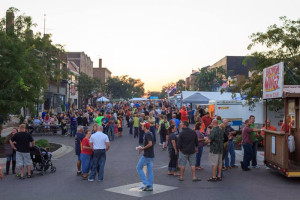 Fans of smoked meats can get their fill this weekend in Denison. The west-central Iowa town is hosting the 2nd annual Tri City BBQ Festival, which opens tonight and runs through tomorrow.

Evan Blakley executive director of the Crawford County Chamber and Development Council. “The first Tri City BBQ Fest was an enormous success and it definitely exceeded our expectations,” Blakley said. “The estimates were that we saw up to 10,000 visitors to the festival per day. So, it was fantastic and our vendors did very well.”

The street festival will be bigger this year — covering more space and likely drawing more people. “We’re a nonprofit event and we rely on our community to raise the funds. We got pretty ambitious this year and said we’d like to increase the scope and budget of the event by 50-percent,” Blakley said. “What we were able to do with that was market further out into the metros and bring in larger name entertainment.”

The musical acts on Saturday night include rock bands Fuel and The Verve Pipe, both of which enjoyed success in the 1990s. Tribute act Hairball plays tonight. There will be an Iowa Craft Beer Tent and 18 food vendors. “Our vendors are coming from as far away as Chicago and then we have some professional barbeque vendors from around Iowa as well,” Blakley said. “We have lots of locals who’ve stepped up too. We like that, we like impacting our local businesses more than anything.”

The event also serves as a “State Championship” BBQ competition. “The winner of our event gets to move on to the highest level national event of BBQ, what they call the World Series of Barbeque in Kansas City,” Blakley said. “So, there’s a lot on the line, $10,000 in prize money as well.” There are kid-friendly activities too, including inflatable attractions, a petting zoo and pony rides. Admission to the festival is free, but tickets are required to see the entertainment.