You are here: Home / Crime / Courts / Supreme Court hears case for and against juvenile life sentences 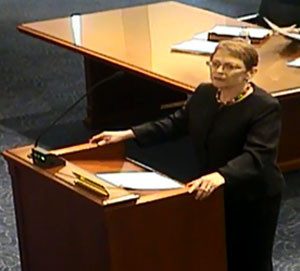 The Iowa Supreme Court heard arguments how life sentences should be handled for people who commit crimes when they are juveniles.

The arguments surrounded the case of Isaiah Sweet, who was 17-years-old when he admitted in 2012 to killing his grandparents in their Manchester home.

Sweet’s lawyers not only say his two life sentences without parole are an abuse under a U.S. Supreme Court ruling on juvenile sentences — but they are also asking that all juvenile life sentences be categorically denied. Shellie Knipfer presented the argument for Sweet.

“Children are different, they’re a work in progress. And because of this constitutional recognition that children are different from adults, the defendant comes here today to request that this court find that the Iowa Constitution categorically bars sentencing juveniles to life without parole,” Knipfer says. Her arguments were interrupted quickly by Justice David Wiggins who questioned why they shouldn’t just rule on Sweet’s sentence instead of making an overall decision.

“We do we have to jump to the categorical one — which is the strongest one — when there are at least two inbetween which may or may not get us without extending the law to categorical at this point,” Wiggins says. Knipfer says if the court doesn’t categorically declare all juvenile life sentences without parole unconstitutional, the justices will have to continually hear such cases over and over.

Justice Thomas Waterman wanted to know why Sweet’s case isn’t one that is right for life in prison without parole. “He murdered his grandparents who had raised him since age four. He planned it, he stood behind his grandfather with a baseball bat, changed his mind, went and got a rifle, shot him dead. His grandmother woke. He loved her, he shoots her dead,” Waterman says. “If this isn’t the rare case that would justify life without parole, what is?” Waterman says.

Knipfer says the sentence never gives Sweet a chance to change get out of prison.
“We are looking at a juvenile who already by nature of the fact that he is a juvenile — he has less culpability. But we are sentencing him to the most harsh penalty that is allowed in Iowa,” Knipfer says. 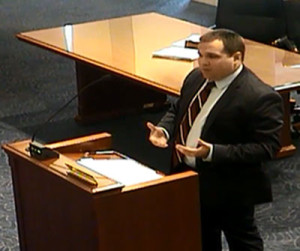 The attorney representing the state, Tyler Buller, argued the sentence is fitting in this case. “Isaiah Sweet is the uncommon juvenile offender who deserves a sentence of life without parole. He is highly culpable and he cannot be rehabilitated,” according to Buller.

Justice Wiggins says evidence presented shows 75 percent of the juvenile offenders can turn things around and return to society. He says there had been no evaluation done on Sweet to determine where he might end up.

“The state has no evidence in this record telling me that this guy is in the 25 (percent) that aren’t rehabilitatable. And one of the things you have to show in order to get life without parole…is that he is irreparably corrupt and unfit ever to reach society. And I don’t know how you get there under this record,” Wiggins says.

Buller argues Sweet’s crime is not like others committed by those to young to know better. “This is not one of those cases, this is not impulsive or impetuous. This is planned,” Buller says. He says the evidence shows the crime wasn’t a youthful indiscretion.

“This is a highly culpable offender. We can learn a lot about his character from how he thought to use earmuffs to protect his own hearing and then picked the bullets to do the most damage. That tells us a lot,” Buller says. “And we know that there is no real prospect for rehabilitation here. We don’t use the word sociopath anymore because it’s not in vogue with APA, but that’s what this offender is if you listen to the tape, if you look at the transcript.”

Sweet’s attorney made the final argument for changing his life sentence without parole.”We don’t know if he is given life with parole whether he will every be released,” She says. “He would have to prove that he has matured and rehabilitated himself. And then and only then would the parole board with a better view would be able to determine whether he would be fit for release.”

This is one of several cases the Iowa Supreme Court has addressed since the U.S. Supreme Court ruling that juveniles cannot automatically be sentenced to life without parole.